I had it brought to my attention recently as to when it comes to issues concerning relationships, and how reluctant we are to share with our extended family and friends,   and understandably so.

For one, we usually don't want to burden family and friends with our issues as this could cause them distress. Or we might feel that neither parties will be supportive, or they will support one partner but not the other, or be too negative, or will want to give advise. Another reason given is that relationship issues are very personal. There is someone else, another human involved, and their right to privacy it too has to be respected, that is unless they give you the authority to share with others.

I recognize that when we are angry and beside ourselves with stress our head space does not always allow us to think things out in a reasonable manner.  I think in general terms we do, and when we don't, then the likely hood is we will be disappointed in ourselves for not being more considerate, or for letting our emotions run away with us.  For these reasons, and there are many others, It is extremely important to consider a neutral person, and a neutral space; where being heard, for both parties, is not going to be tainted with a bias.

Counsellors are not there to guide you as to a decision, they are there to assist you explore and examine your situation. To manage the process, so that what ever the outcome is, it is your outcome, your decision. That you have had the opportunity to put all the different ideas, experiences, history of your relationship, the good and the bad, out there to examine and reflect on.

Counsellors can also offer tools to assist couples in all different scenarios.  We live in a fast changing world. Relationships are such, not that the issues are necessarily more complex, just the array of tools that a Councillor needs to have access to, do need to be much broader than they once were.  Once upon a time a couple was defined as being two people who were married.  Counsellors were called Marriage Councellors.  Today we work with 'Relationship' married and unmarried, same sex, de facto, partnerships, blended families, good friends even, partners who are separated but who have children together and need the assistance of Counsellor to work through issues concerning their children.

Relationship in the context of every day living, it is everywhere, what we look at, our environment, what we feel, what we do, what we are at one with...

This represent a tiny snippet of what needs to go under the heading of 'Why Relationship Counselling'.


Posted by William Garden at 20:50 No comments:

From my Counselling Room Window 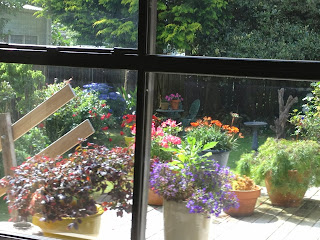 Posted by William Garden at 20:28 No comments:

Quotations and other bits and pieces


“Whenever you want to achieve something, keep your eyes open, Concentrate and make sure you know exactly what it is you want. No one can hit their target with their eyes closed” Paulo Coelho

"The whole problem with the world is that fools and fanatics are always so certain of themselves, but wiser people are so full of doubt." Bertrand Russell

"It is the truth we ourselves speak rather than the treatment we receive that heals us." O. Hobart Mowrer

"Once you have flown, you will walk the Earth with your eyes turned skyward; for there you have been, there you long to return." Leonardo De Vinci
I found this on page 1 of the book "A General Theory of Love" by Thomas Lewis. MD., Fari Amini, MD., Richard Lannon, MD.  Wont take too much thought as to what the authors of the book were referring to :)

A couple of interesting quotes I found: all anonymous,
unfortunately, means I can't give them due credit.

"Don't  beg anyone to stay in your life.
If they want to be in your life, they will stay."

"If I cut you off, the chances are you handed me the scissors."


I do like the idea of people, if they so choose, being able to put their thoughts out there in print.  Those who want to read it, they will; those who don’t, won’t - that simple.
If you look through material on therapeutic interventions you will find mention that putting words on paper can be a successful means of dealing with an issue.  I would encourage people to start writing down their thoughts and feelings what is going on around them.  You don’t need a computer.  Don’t be concerned about grammar or spelling.  Just write. If writing is not your thing, then draw or paint. There are many other options.

I follow a number of bloggers; most of who are employed by the major news media outlets. I have identified there is some wonderful thinking out there; and it’s so good that it can be put into a format we can readily access.  Blogging does seem to open doors to having far more open discussion on topics that affect us as individuals. And even if we have a point of view that appears diverse in nature, we can at least air it and get some feedback.  That we can do so on a global basis is absolutely wonderful.

That said, I guess, a good number of us who have the means are restricted due to a limitation on our time when there are so many other things need doing in a day.  The internet, not blogging as such, the initial thinking appeared to be, it was going to give us more time to do other things.  Fortunately or unfortunately, for most, it has become the “other” thing.

That is not so for those who live in countries where people are denied the freedom to access the net. Where freedom of speech is an extremely limited commodity for reasons related to their rulers need for self preservation.Then there are the two plus billion people who are struggling to just find the very basics to exist, which is an entirely different conversation.

Bringing it back to those of us who have the means: should have said we did believe we were fortunate to be living in an open society where we had the freedom to share our conversations as to our thoughts, our feelings and our beliefs, with only those we chose. We have recently been woken up with a jolt that this might not have been so for some time.  It appears that big brother government (ours or someone else’s) might indeed have been spying on us and collecting our data, what is very personal to us.

It was suggested initially, being spied on was what was needed to be done to keep us safe from terrorists.  I have still not heard them come forward with any convincing evidence that supports their infringement into my head space.

There are a couple of other rationales’ being flouted as to why it was or indeed should be okay for government to look over our shoulder as we type up our personal emails etcetera. One is that if we have nothing to hide then why would we object?  Very simplistic!  I don’t want to get into the semantics of it all.  If there is merit in this reasoning, as to why it should be okay, I ask why then do we bother putting our letters in an envelope, or using passwords, or maintaining private diaries? Why bother seeking confidentiality when you share personal information.

Now that the question has been raised and they have been unable to give us the answers, they now want to put legislation in place to enable them to eves drop and collect what info travels through my computers legally.  Am not sure people fully understand what the consequences could be in the longer term.

Strangely enough, the same politicians (not all) who want to make it less okay for us to have a personal and private life, regarding what we put onto a computer or into print are continually squabbling as to what should be put out there regards how policy is arrived at.   Policy that affects “us” and that was put in place by those who “we” elected. Does seem to be a lot of double standards going on?

I believe the real danger is that what we write today in total innocence can be accessed tomorrow by someone with sinister intent. Someone gets a snitch on you and they have access to this data, they then put their own spin on it.  Very scary thought!
I know!  “Never going to happen to me”.  A dollar for every time I have said that and then had to eat my words.

We the vast majority do not write anything we would need to ever be ashamed of.  That is not the issue.  Our thought patterns, our feelings, our beliefs. They are all ours, unique to you and me, and unless we as individuals choose of our own accord to share these with who ever, we want them to remain ours. It is not just the consequences for us, it is our children, our grandchildren, their children.  Is it our right to minimize their freedom to communicate with others freely?

As a Counsellor I am privy to client’s feelings, their experiences, their thoughts, and their beliefs. I want to feel what is shared with me if and when I transcribe it onto a machine cannot be accessed by anyone other than me.
In all this that has been going on regards our individual freedoms, I believe the saddest and most tragic failure has been the failure of most of the main stream media to ask the questions and to hold the politicians to account.

But even allowing for that failure, there is sufficient information out there to have encouraged people themselves to let their feelings and thoughts be known. There are lots of means to do this directly. We as a nation and as a member of what we believed, the free world, are closing our eyes to so much questionable policy.  Often policy that appears not only about our privacy, but also about dollars in pockets (won’t be yours our mine), than about the destructive impacts on the fundamentals of a healthy, well being society.  The freedom we so value is being corroded and corrupted under a number of banners which I don’t feel confident are not related.

Might be a time for people to read or reread Orwell's “Nineteen Eighty-four”? Or maybe just to dig deep into your thought process while you look around you what is happening elsewhere, where freedoms are being denied by governments who control their populations every word.

PS: There is some good information out there that has broadened the debate as to what this snooping is all about; it is worthwhile updating oneself with this knowledge.
Posted by William Garden at 15:12 No comments: